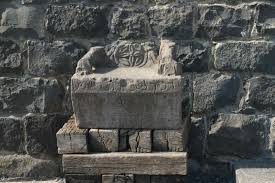 Scholarly opinion is divided as to whether the “seat of Moses” mentioned in Matt 23:2 is to be understood literally or figuratively. F. W. Beare, for example, thinks that the saying is metaphorical and serves merely as a foil for what follows.1 David Hill, on the other hand, takes the saying literally: The reference is to a real seat upon which the Jewish leaders sat.* Neither author, however, presents any substantial evidence to support his respective view. In this article I wish to call attention to certain evidence which seems to elucidate this verse. My conclusion is that the position of Hill is basically correct. 1. Archaeological Euidence E. L. Sukenik, who has done much to make the possible context of Matt 23:2 clearer, gives several examples of “Chairs of Moses” found by archaeologists.3 The first to be unearthed was that IF. W. Beare, The Gospel according to Matthew (Oxford, 1981), p. 448. See also R. T. France, The Gospel according to Matthew, Tyndale New Testament Commentaries (Downers Grove, IL, 1985), p. 324; Walter Grundmann, Das Evangelium nach Matthaus, 5th ed., Theologischer Handkommentar zum Neuen Testament, vol. 1 (Berlin, 1981), p. 483; M.-J. Lagrange, Evangile selon Saint Matthieu, Etudes Bibliques (Paris, 1923), p. 437; F. N. Peloubet, The Teacher’s Commentary on the Gospel according to St. Matthew (New York, 1901), p. 271. 2David Hill, The Gospel of Matthew, The New Century Bible Commentary, (Grand Rapids, MI, 1972), p. 310. See also A. Schlatter, Der Evangelist Matthaus, 6th ed. (Stuttgart, 1963), p. 663; J. C. Fenton, Saint Matthew, Westminster Pelican Commentaries (Philadelphia, 1963), p. 366; H. Benedict Green, The Gospel according to Matthew, The New Clarendon Bible (London, 1975), p. 189; K. Stendahl, “Matthew,” in Peake’s Commentary on the Bible, eds. Matthew Black and H. H. Rowley (London, 1962), p. 792; W. F. Albright and C. S. Mann, Matthew, AB (Garden City, NY, 1971), p. 278; Robert H. Gundry, Matthew: A Commentary on His Literary and Theological Art (Grand Rapids, MI, 1982), p. 453-454; P. Benoit, ~’&an~ile selon Matthieu (Paris, 1961), p. 139. 3E. L. Sukenik, Ancient Synagogues in Palestine and Greece (London, 1934), p. 57-61. 54 KENNETH G. C. NEWPORT at Hammath-by-Tiberias. This seat was carved from a single block of white limestone and measures some 94 cm. by 60 cm. As might be expected, the chair was found with its back towards Jerusalem, meaning that the one who sat upon it would be facing the ~ongregation.~ In 1962 a better preserved “seat of Moses” than that of Hammath-by-Tiberias came to light at Chorazin. This seat, too, was carved from a single block of stone. The chair stands 56 cm. high and 73 cm. broad and originally had armrests and a back.5 On the front of the chair is an inscription which reads, according to Sukenik’s translation, “1. Remembered be for good Judah b. Ishmael 2. who made this ozoa 3. and its staircase. As his reward 4. may he have a share with the righte~us.”~ A third example of this sort of chair comes from Delos. Both Ant. 14213,231 and 1 Macc 1523 indicate that a Jewish community was well entrenched there from early times.

Belle Mazur has strongly argued that the building uncovered at Delos is not in fact a synagogue,7 and her arguments have convinced, among others, Cecil Roth.8 Mazur points out that the building does not face Jerusalem but rather faces to the Northea~t.~ This factor alone, however, does not provide sufficient support for Mazur’s contentions, for, as Andrew Seager has noted, not all synagogues faced Jerusalem.lo More importantly, Mazur has failed to explain the numerous religious inscriptions found in the building.” Sukenik treats the Delos building as a synagogue, and indicates that it is one of the earliest known, perhaps dating back to the end of the second century B.C.~~ 5See the photographs accompanying J. Ory, “An Inscription Newly Found in the Synagogue of Kerazeh,” PEFQS 59 (1927): 51. %ukenik, p. 60. 7Belle Mazur, Studies on Jewry in Greece (Athens, 1935), pp. 9, 15-22. Wecil Roth, “The ‘Chair of Moses’ and Its Survivals,” PEQ 81 (1949): 100- 1 1 1. gMazur, p. 20. loAndrew R. Seager, “Ancient Synagogue Architecture: An Overview,” in Ancient Synagogues: The State of Research, ed. Joseph Gutmann, Brown Judaic Studies, no. 22 (Chico, CA, 198l), p. 41 and fig. 5. llP. Jean-Baptiste Frey, Corpus Inscriptionum Iudaicarum: Recueil des inscriptions juives qui uont du IIZe sitcle avant Jesus-Christ au VIZe sitcle de notre ire, 2 vols. (Rome, 1936), 1:725-73 1. 12Sukenik, p. 40. The marble seat found in the ruins may, therefore, be one of the oldest examples of a seat of Moses known.l3 2. Literary Euidence Whether these chairs were actually called “seats of Moses” is not entirely clear. The literary evidence is thin indeed, for aside from Matt 23:2 itself the expression “seat of Moses” seems not to be used in early sources. The earliest reference outside of the NT appears in Pesikta de Rab Kahana, which most authorities class among the earliest of the Midrashim, perhaps dating back to the fourth century A.D.~~ The Pesikta passage in question refers to a Palestinian scholar by the name of Rabbi Aha, who, when explaining the biblical description of Solomon’s throne, said that it was “like the Kathedra of Moses ” (37&3lt R7ltn7 R733).15 The suggestion made by M. Ginsburger that the reading of the Pesikta needs drastic emendation and that consequently the “seat of Moses” never existed16 has not found favor among scholars. Moreover, in the light of the archaeological discoveries made since Ginsburger’s article appeared, his suggestion does indeed seem unnecessary. It appears, then, that at least by the fourth to fifth centuries the “seat of Moses” was the name given to some artifact of Jewish life. Relying partly upon the reading of Matt 232 itself, we may not be too far wrong in suggesting that this was a chair found in the synagogue of the type unearthed at Chorazin, Tiberias, and Delos. But was this seat reserved for the leaders of the Jewish community, and did these teachers sit upon it in a literal sense? Cecil Roth answers these questions in the negative, and his suggestions need careful examination. He points out that there exists in Rome a community of Jews which claims a continuous tradition going back to classical times, and that this community has a practice which may throw some light upon the problematic “chair of Moses” 131bid., p. 61 gives a diagram of the seat. 14See, e.g., Bernard Mandelbaum, “Pesikta De-Rav Kahana,” in Encyclopaedia Judaica (Jerusalem, 1971), 13: 333-334 and J. Theodor, “Midrash Haggadah,” in Jewish Encyclopedia (New York, 1904), pp. 559-560. 15Solomon Buber, PZsikta dZ-Rub Kaha’na (1868), sec. 1, p. 12; William G. Braude and Israel J. Kapstein, trans., PZsikta dZ-Rub KahZna (Philadelphia, 1975), p. 17. 16M. Ginsburger, “La ‘Chaire de Moise,'” Revue des Etudes Juives 90 (1931): 161-165. 56 .

KENNETH G. C. NEWPORT mentioned in Matt 23:2.17 There are times during the synagogue service when the scroll of the law is not in use. The general custom among Jews is that, when the scroll is not in use, it is held by an individual who has been assigned this task. Roth points out that this custom is not, however, followed in Rome. Instead, whenever the scroll of the law is not in direct use, it is placed upon a “chair” which has been especially designed for this purpose, having holes drilled into the seat in which the staves of the scroll may be inserted in order to keep the scroll in place. Roth is fully aware, of course, that the present Great Synagogue of Rome was built at the beginning of the present century and that this particular seat can therefore hardly be used to illuminate the practices of first-century Judaism.’* But what is especially to be noted is that the basement of the present building houses several earlier examples of such chairs, the oldest of which bears an inscription dated 1594.19 All of these earlier chairs have similar holes bored in them and were therefore probably used for the same purpose. Further evidence for Roth’s hypothesis comes from the eighteenth-century Jews of China. In 1704 a certain Jesuit priest by the name of Jean-Paul Gozani visited a community of Jews at KaiFeng-Fu and published a description of their synagogue.20 Among other details, Gozani mentions that in the midst of their synagogue was “a magnificent and highly elevated chair, with a beautiful embroidered cushion. ” “It is,” Gozani continues, “the chair of Moses [chaire de Moise], on which on Saturdays (their Sundays) and the most solemn days they place the book of the Pentateuch. . . .”21 This evidence does not stand alone, for Roth also notes that a later Jesuit priest, Gabriel Brotier (ca. 1770), also recorded that it was the practice of the Jews of Kai-Feng-Fu to place “the scriptures” on the chair after it had been read to the pe0ple.~2 17Roth, pp. 103-104. 181bid., p. 104. lgIbid. 201bid., pp. 105-106; see also M. Sulzberger, “Encore le Siitge de Moise,” Revue des ~tudes Juives 35 (1897): 110-1 11. 21Sulzberger, p. 110. 22Roth, p. 106. For a much more complete account of the Jews of Kai Feng Fu, including a discussion of the “Seat of Moses” found in the synagogue (pp. 8, 13-15, Roth’s observations are important, though they may not be decisive. We cannot be sure that the Jews of the Kai-Feng-Fu synagogue themselves called this “chair” the seat of Moses. Both of the Jesuit priests may have been influenced in their understanding of the synagogue ornamentation by the passage from Matthew presently under discussion. It does, however, seem at least possible that in some Jewish communities some form of seat, possibly known as the “chair of Moses,” was used, not as a place from which the law was read and expounded, but as a stand for the lawscroll itself. Whether this was the practice in first-century Palestine cannot be determined with certainty.

It would be unwise to base any understanding of Matt 23:2 on the data available from sixteenthcentury Rome and eighteenth-century China. Further, Roth himself notes that the “chair of Moses” now evident in Rome, is scarcely wide enough to enable anyone to sit upon it comfortably.Z3 This is not the case, however, with the much larger chairs found at Chorazin, Hammath-by-Tiberias, and Delos. Finally, on an exegetical level, Roth’s suggestion that the words of Matt 23:2 are symbolic and that the phrase “they sit on Moses’ seat” merely points to intellectual arrogance *4 must be viewed with suspicion, for, if such is the case, what is meant by the words “therefore do all that they tell you”? Is the meaning of Matthew 232 really that “the scribes and the Pharisees are intellectually arrogant, therefore you should obey them”? Is it not more probable that at one time the “chair of Moses” was a seat upon which sat teachers who were in some way considered authoritative expounders of Torah? In light of the available archaeological and written evidence we conclude that the best understanding of the “seat of Moses” 40, 43, 128), see William Charles White, Chinese Jews: A Compilation of Matters relating to the Jews of K’ai fhg Fu, 2d ed. (Toronto, 1966), and Michael Pollak, Mandarins, Jews, and Missionaries: The Jewish Experience in the Chinese Empire (Philadelphia, 1980). 23Roth, p. 104. 24Roth, p. 110. 58 KENNETH G. C. NEWPORT found in Matt 232 is that it refers to an actual seat upon which the leaders of the Jewish congregation sat. This ties in well with the most probable exegetical understanding of the verse. Indeed, it may be that Matt 23:2 in its context within the chapter is itself the best evidence to support a literal understanding of the phrase “chair of Moses. “