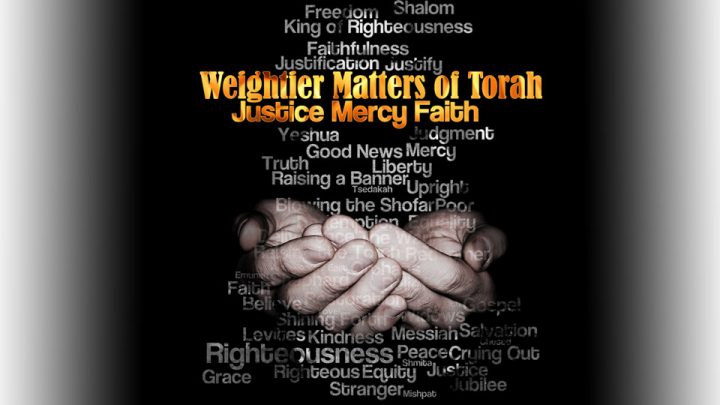 In Matthew 23:23, Yeshua criticizes the scribes and Pharisees because of their focus on the minutia of the law while neglecting the weightier matters of Torah: justice, mercy, and faith.  What exactly did Yeshua mean by this?  In this 4 hour teaching, we will take an in depth look at both the Greek words behind Matthew as well as the Hebrew words from which these derive: mishpat, chesed, and emunah/emet.

In the Scriptures, these three words appear together along with a fourth word; righteousness.  The terms justice and righteousness (Hebrew: mishpat u'tsedakah) form a hendiadys that was well known throughout the ancient Near East.  Whenever a new king took over a throne, he would establish justice and righteousness throughout the land (often as propaganda)  which meant a release of debts, release of slaves, establishment of laws to safeguard the widows, the poor, and the orphans, as well as other similar decrees.  In Genesis 18:19, YHVH declares that He has chosen Abraham and his household to keep the way of YHVH by doing righteousness and justice!  This motif is carried on throughout the Torah and is the subject of the Prophet's outcry against Israel.  This teaching will show how righteousness and justice are the focus of Yeshua's ministry as well as his gospel commission to all of us.

11 thoughts on “Weightier Matters of Torah”